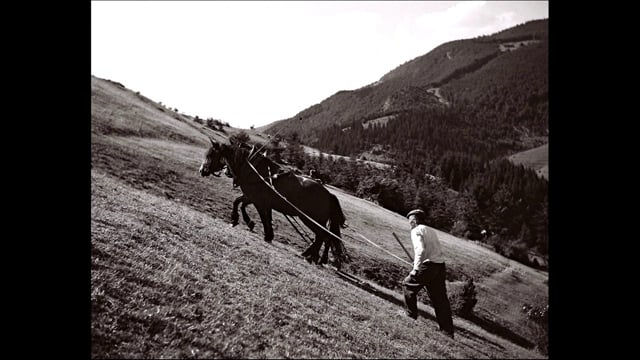 Igor Grossmann was born on the 3rd November 1924, in Žilina. He completed his studies in Bratislava, in 1946. He has been photographing since the beginning of the 50’s. In the years 1953-1958 and 1963-1970, he portrays above all the Slovak village, in all of its forms. Since the mid-60s, he begins to also be devoted to advertising, industrial and fashion photography, and from 1966 already as a professional photographer. The bulk of his first significant documentary cycle, Prváci (Freshmen), comes from the years 1964-1965. In the years 1968-1971, he successively visits Paris and France, Italy, Romania and Armenia, and he creates extensive photo files from the images of these countries. Starting with the cycle, O Dreve (About wood) (1964-65), he is also more and more devoted to fine-art photography. Since 1969, he is living and working in Bratislava. In the years 1970-1977, he is working for the Živena publishing house and several illustrated magazines. Since 1972, he works as a freelance photographer and since that time, and especially in the 80’s, he is devoted to the portraiture of important personalities of Slovak culture. At the same time, he has also developed his fine-art interests, the result of which is a large serum of photographs and the subsequent book publication, “Metamorfózy skla (Metamorphosis of glass)” (1988). In the 90’s, he concentrates on his older photographs of Slovak villages and presents them in an extensive exhibition and in the publication, “Odviate časom (Images gone with time)” (2000). Since the end of the 90’s, he is once again intensely devoted to fine-art focused colour photographs, from which derive also his latest, for the time being, exhibition projects. However, despite the fact that he possesses an extensive knowledge of modern fine art and many of his images may represent the equivalent of a modern fine-art direction, he achieved the most significant results mostly in the field of photographic documentation.